The emergence of the Nation.

The name Malaysia comes from an old term for the entire Malay archipelago. A geographically truncated Malaysia emerged out of the territories colonized by Britain in the late nineteenth and early twentieth centuries.

Britain’s representatives gained varying degrees of control through agreements with the Malay rulers of the peninsular states, often made by deceit or force. Britain was attracted to the Malay peninsula by its vast reserves of tin and later found that the rich soil was also highly productive for growing rubber trees.

Immigrants from south China and south India came to British Malaya as labor, while the Malay population worked in smallholdings and rice cultivation.

What was to become East Malaysia had different colonial administrations: Sarawak was governed by a British family, the Brookes (styled as the “White Rajas”), and Sabah was run by the British North Borneo Company.

Together the cosmopolitan hub of British interests was Singapore, the central port and center of publishing, commerce, education, and administration.

The climactic event in forming Malaysia was the Japanese occupation of Southeast Asia from 1942-1945. Japanese rule helped to invigorate a growing anti-colonial movement, which flourished following the British return after the war.

When the British attempted to organize their administration of Malaya into one unit to be called the Malayan Union, strong Malay protests to what seemed to usurp their historical claim to the territory forced the British to modify the plan.

The other crucial event was the largely Chinese communist rebellion in 1948 that remained strong to the mid-1950s. To address Malay criticisms and to promote counter-insurgency, the British undertook a vast range of nation-building efforts. Local conservatives and radicals alike developed their own attempts to foster unity among the disparate Malayan population.

These grew into the Federation of Malaya, which gained independence in 1957. In 1963, with the addition of Singapore and the north Borneo territories, this federation became Malaysia. Difficulties of integrating the predominately Chinese population of Singapore into Malaysia remained, and under Malaysian directive, Singapore became an independent republic in 1965.

Malaysia's ethnic diversity is both a blessing and stress.

Urbanism, Architecture, and the Use of Space

Urban and rural divisions are reinforced by ethnic diversity with agricultural areas populated primarily by indigenous Malays and immigrants mostly in cities. Chinese dominance of commerce means that most towns, especially on the west coast of the peninsula, have a central road lined by Chinese shops. 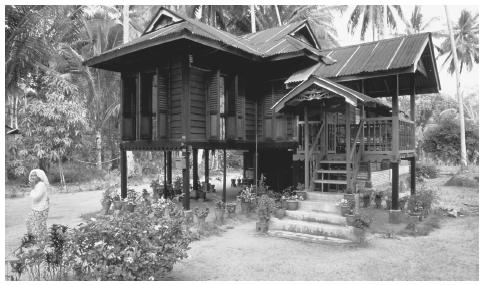 Other ethnic features influence geography: a substantial part of the Indian population was brought in to work on the rubber plantations, and many are still on the rural estates; some Chinese, as a part of counter-insurgency, were rounded up into what was called “new villages.” A key part of the 1970s affirmative action policy has been to increase the number of Malays living in the urban areas, especially Kuala Lumpur.

Governmental use of Malay and Islamic architectural aesthetics in new buildings also add to the Malay urban presence. Given the tensions of ethnicity, the social use of space carries strong political dimensions. Public gatherings of five or more people require a police permit, and a ban on political rallies successfully limits the appearance of crowds in Malaysia.

It is therefore understandable that Malaysians mark a sharp difference between space inside the home and outside the home, with domestic space, carefully managed to receive outsiders: even many modest dwellings have a set of chairs for guests in a front room of the house.

Land ownership is a controversial issue in Malaysia, where indigenous groups are struggling to protect their claims from commercial interests.

Tropical fruits grow in abundance, and a local favorite is a durian, known for its spiked shell and fermented flesh whose pungent aroma and taste often separates locals from foreigners.

Musang King, any durian lover will immediately recognize the name. Durian Musang King is the most sought-after durian and one of the most expensive thanks to its irresistible taste.

Durian Musang King is also known as mao shan wang comes with thick & yellow golden flesh, and is creamy, sweet, and sometimes bitter in taste. Not to forget the small seed. This unique combination makes it one of the most popular durians among durian lovers.

Get taste of Musang King now

The only reason I left the salon was really to chase these dreams of either being an MTV host or a travel host. I loved the idea of doing something fun and interesting for a living, and that is what got me over to Malaysia.
Henry Golding
Actor, model, and television host
Malaysian-British

Stay informed to get the latest information